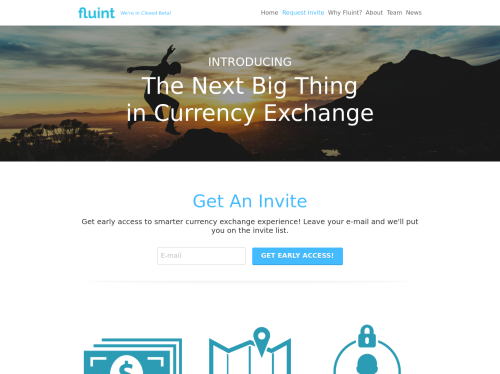 We are a P2P foreign currency marketplace that matches sellers with unused foreign currency with buyers looking to get a better rate. In that sense, we want to pair up people coming back from a foreign country to those that are planning on leaving. Since we are just the medium of communication between the two, there is no transaction fee or hidden cost of any sort. Think craigslist for foreign currency but with better UI/UX, security, locality, and freedom to haggle. fluint plans on operating in major cities and airports, where there is enough population density for supply to meet demand. Our customers have multiple use cases on both ends; buyers can do multiple transactions months before traveling to stockpile proportionally cheaper cash, or become sellers and exchange their home currency while abroad without going to a bank. Similarly, sellers can exchange leftover cash that they've accumulated overtime or immediately after they've returned. Our mission is to provide users an efficient way to exchange foreign cash without being ripped off by a bank or foreign exchange booth.