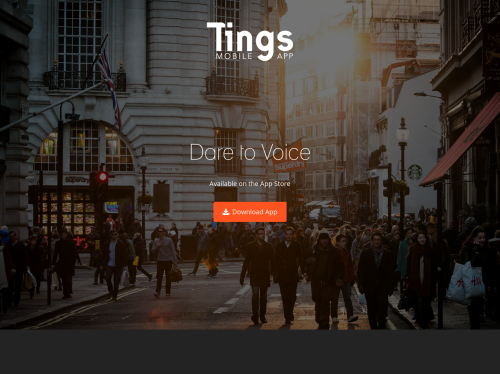 Introducing Tings: an anonymous social network centered around our most human form of expression - Voice. Users on Tings record up to 11 seconds of voice and choose from various morphing effects to disguise and publish their post. "Dare to Voice" is Tings’ motto; encouraging users to share content that may not be better expressed in other forms, when it comes to emotion and personality. Unlike other voice morphing apps like Tom Cat , Tings takes a social networking approach; bringing people with related interests together through their voice, in a fun and secure way. It is the first anonymous social network that is not geared toward negativity. Tings was created after the rise of anonymous social networks as a challenge to the idea that anonymous content is only for secrets or gossip. With Tings being anonymous is more than that; it is about freedom. Because users do not have a profile, one can speak in the most honest way - without concern that their public identity will be disclosed or tarnished. In addition, the network is not saturated with things like filtered pictures, “Top 10” lists or the next trend. On Tings, users will take more time to create and listen to posts because they only spend energy on this - other distractions simply don’t exist. With these crucial differences, it becomes a more genuine social network, produced by a genuine team. The idea comes from a group in Beijing China called Beijing MIC Technology Co. ltd. They are a group of 6 devoted to developing and promoting "Tings." Co-founder’s Fang Ning and Kevin Ting Wing Yuen believe personality and a unique perspective are key to choosing the best employees. In addition to Ning and Kevin, the company employs 4 others that do everything from back-end work to front of house marketing. This includes Chinese locals, a French citizen, and an American who recently moved to China to work for the new startup. By having employees from around the world, the group utilizes different perspectives on using technology, and they frequently discuss how to implement key features that translate easily between users from different parts of the world. The belief that fuels this startup is people have a universal desire to speak out fearlessly.

Give Tings - Dare to Voice some love: Community for Chiefs of Staff to accelerate their careers. Your observability stack, managed by us completely for free The most detailed and accurate macOS UI Kit for Sketch 💎 Your digital assets exposed to the internet create threats.