We're Squeaker and we save lives. 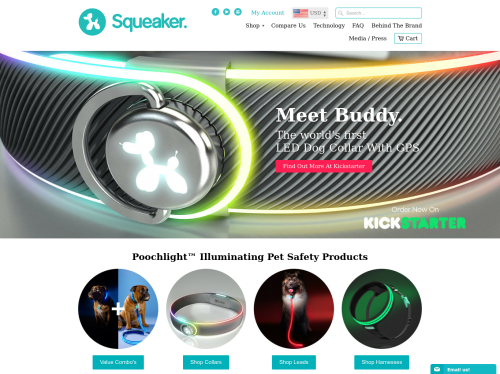 Hey Guys! We're Squeaker and we save lives. We've just launched our Kickstarter campaign Buddy. The Dog Collar Reimagined and were hoping for you guys to share it with the world! Buddy is an LED dog collar with GPS and Bluetooth technology that keeps dogs safe while tracking & organizing your pets daily activity. There's a 3-axis accelerometer, temperature sensor and an almost infinite amount of beautiful lighting effects and color combinations. It looks incredible in the dark and it's got a GPS chip inside so you'll always know where they are. You can setup geofences and virtual boundaries so if they escape, you'll get a notification on your phone so you can track them in real-time via GPS. Here's the Kickstarter link: http://kck.st/1hfELHt Cheers, Squeaker